The Resident Coordinator’s Office works under the direct leadership of the Resident Coordinator and is comprised of professional officers based in the Jerusalem, Ramallah and Gaza offices. A key aspect of the RCO’s work is to enhance coordination and coherence between the 23 humanitarian and development agencies that comprise the UN Country Team and with the political mandate of UNSCO. It also engages with the donor community, the Palestinian Authority, the Government of Israel and civil society on the planning, implementation, monitoring and evaluation of aid policies and programming.

The UN Resident Coordinator in Palestine

Ms. Hastings brings to this position over twenty years of experience in humanitarian affairs, development coordination and political affairs.  Since 2018 she has served as Deputy Director in the Operations and Advocacy Division of OCHA in New York.  Previously, she was Senior Adviser in the United Nations Peacekeeping Force in Cyprus (UNFICYP) (2014-2018), Country Director for Pakistan in the United Nations Office for the Coordination of Humanitarian Affairs (OCHA) (2011-2014) and Chief of Staff in the Office of the United Nations Special Coordinator for the Middle East Peace Process (UNSCO) (2003-2011).

Ms. Hastings has also served as United Nations representative to the Office of the Middle East Quartet Envoy for the Gaza Disengagement, and in senior roles in the United Nations peacekeeping missions in Kosovo and East Timor, the Office of the High Commissioner for Human Rights (OHCHR) and the Organization for Security and Co-operation in Europe (OSCE).  Prior to joining the United Nations, she practiced law in the private sector and conducted legal research for the International Commission of Jurists. 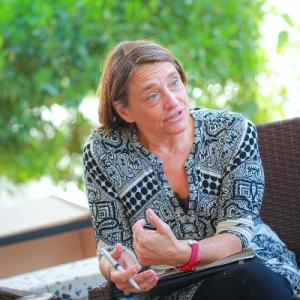