An introduction to the brand new Youth Advisory Panel (YAP) for Palestine, written by the members of the YAP under the supervision of UNFPA. 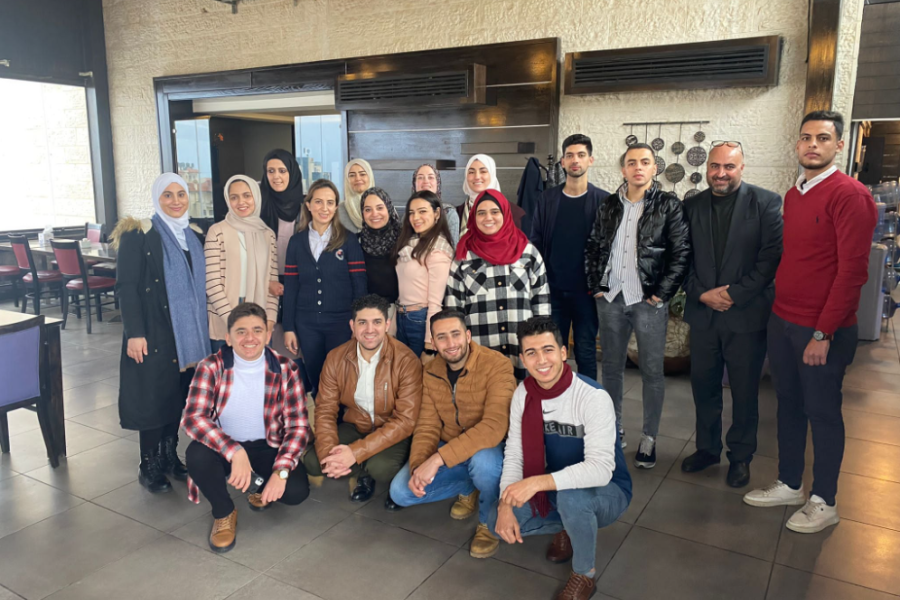 02 Hebron Courthouse - A Model for the Future
02 Story

Hebron Courthouse - A Model for the Future 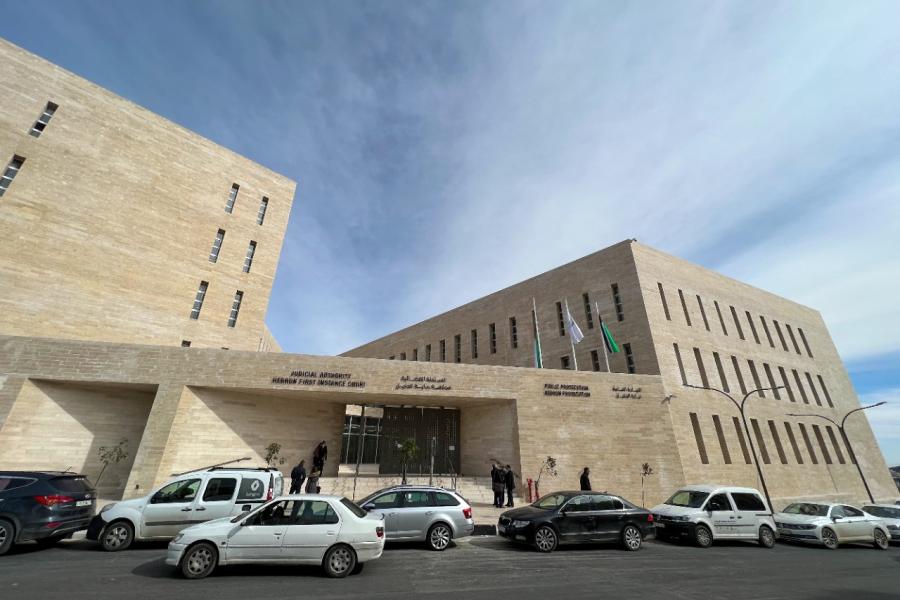 Stepping back in time at Gaza's cultural heritage sites 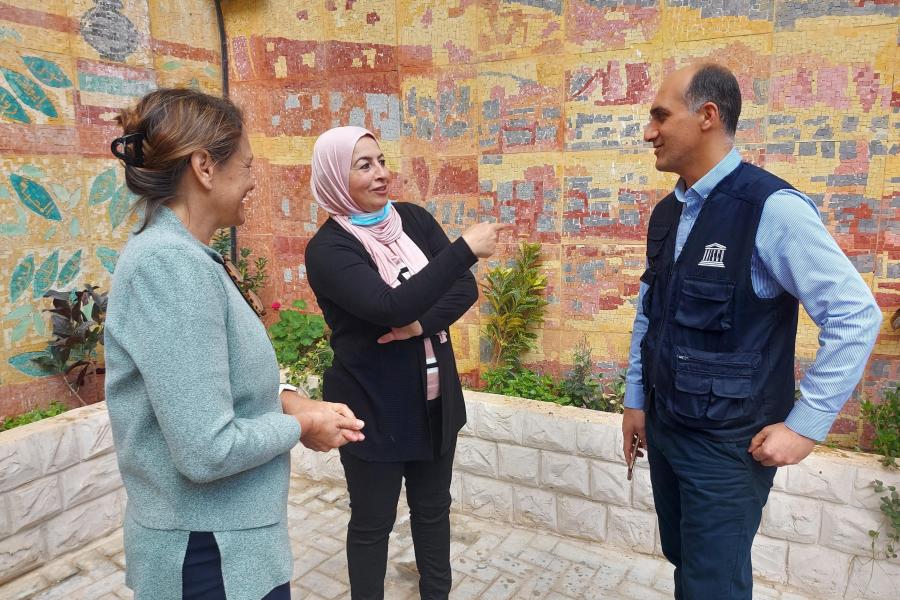 The Sustainable Development Goals in Palestine

Read more
1 of 5
Press Release
16 October 2022
The UN Marks World Food Day in Palestine
Millions globally are at risk of increasing hunger: all of us must respond at scale to the drivers of this crisis: conflict, climate shocks, and the threat of a global recession. In Palestine, the United Nations estimates 1.78 million people experience some form of food insecurity, meaning they lack regular access to enough safe and nutritious food for normal growth and development. The World Food Programme estimates that 75 percent (260,000) of the 350,000 Palestinians receiving food assistance in September 2022 resorted to negative coping mechanisms, such as buying less food or going into debt. Increasing costs, limited funding and the need to adapt to climate shocks mean Palestinian farmers may have to reduce production which will inevitably result in only more food insecurity. The UN is responding to these needs and working with Palestinians to ensure they can develop resilient food systems. In 2021, UNRWA provided over one million Palestinians in Gaza with emergency food assistance. To improve their immediate food and nutritional needs, the World Food Programme supported 6,000 vulnerable people with a range of climate-resilient agricultural assets, such as hydro and aquaponics, greenhouses, livestock, poultry, beehives, and solar panels units,  The Food and Agricultural Organisation supported over 15 000 farmers, fishers and herders, providing farm and dairy equipment, fodder, and investment in the agri-food system.  They also build capacities to increase employment, income, and livelihood resilience. Food is a basic human need; without it, other development needs cannot be addressed. Only with solidarity and cooperation in promoting sustainable agri-food system development will we see better production, nutrition, environment and lives for every Palestinian household and community.
Read more
1 of 5
Press Release
28 August 2022
Statement of Lynn Hastings, United Nations Resident and Humanitarian Coordinator in the Occupied Palestinian Territory
But children in the West Bank and Gaza face challenges that many children across the world cannot imagine. Since the beginning of the year, 20 children were killed in the West Bank, compared to 12 during the same period last year. Currently, there are 56 outstanding demolition orders against schools where at least 6,400 children are taught in the West Bank including East Jerusalem. In the first half of 2022 in the West Bank, the United Nations recorded 115 education-related violations including, direct or indirect firing of tear gas, stun grenades, and/or rubber-coated bullets, intimidating military and settler presences at schools, detentions, and movement restrictions preventing students from reaching their classes. Nearly 8,000 students have been impacted, increasing the risk they will drop out of school. The latest escalation in Gaza claimed the lives of 17 children. Schools are overcrowded, with 65 per cent of schools operating on double shifts. The conditions in Gaza for children, including having lived through four escalations in hostilities during their lifetime, increase the need for specialized psychosocial support services. Despite the many challenges faced, the youth literacy rate of Palestinians is over 99 per cent and 93.8 per cent of children graduating from primary school go on to a secondary education. Palestinian children hold in their hands the potential and drive to reimagine education, co-create new pathways for development, and transform their lives. They are tomorrow’s leaders. We must do more to protect and support them, as children must not be exposed to violence or exploited for any purpose. The United Nations wishes all children a successful and fun-filled year where their fundamental right to education is protected and realized by all. We remain committed to protect children from violence and support them to fulfill their potential.
Read more
1 of 5
Press Release
18 August 2022
Statement by UN Agencies and the Association of International Development Agencies working in the Occupied Palestinian Territory
The United Nations and its partners take seriously allegations of funding terrorism and the Israeli designations of these organizations as “terror organizations” and/or “unlawful”. Despite offers to review the allegations to determine if funds have been diverted, Israeli authorities have not given any compelling evidence to the United Nations Agencies nor its NGO partners working in the Occupied Palestinian Territory to support these designations. Several Member States recently announced that the evidence which was shared with them does not justify the designations.  The attempted closures of these organization offices represent the latest in a series of actions by Israel that are further limiting the ability of human rights, humanitarian and development work in the Occupied Palestinian Territory, which affect all institutions working to promote human rights, development and delivering assistance. We reiterate our November 2021 statement: counter-terrorism legislation must be in accordance with obligations under international law, in particular, international humanitarian law and human rights law, which include full respect for the rights to freedom of association and expression. It cannot be applied to legitimate human rights and humanitarian work; the breadth of the Israeli 2016 Anti-Terrorism legislation and its impact on the presumption of innocence present serious concerns under international law. We urge the Government of Israel to refrain from any action that would prevent these organizations from continuing their critical human rights, humanitarian and development work in the Occupied Palestinian Territory.   𝘕𝘰𝘵𝘦𝘴:
1. 𝘙𝘦𝘱𝘳𝘦𝘴𝘦𝘯𝘵𝘪𝘯𝘨 𝘜𝘯𝘪𝘵𝘦𝘥 𝘕𝘢𝘵𝘪𝘰𝘯𝘴 𝘥𝘦𝘷𝘦𝘭𝘰𝘱𝘮𝘦𝘯𝘵 𝘢𝘯𝘥 𝘩𝘶𝘮𝘢𝘯𝘪𝘵𝘢𝘳𝘪𝘢𝘯 𝘦𝘯𝘵𝘪𝘵𝘪𝘦𝘴, 𝘢𝘨𝘦𝘯𝘤𝘪𝘦𝘴, 𝘧𝘶𝘯𝘥𝘴 𝘢𝘯𝘥 𝘱𝘳𝘰𝘨𝘳𝘢𝘮𝘮𝘦𝘴.
2. 𝘈𝘐𝘋𝘈 𝘳𝘦𝘱𝘳𝘦𝘴𝘦𝘯𝘵𝘴 83 𝘐𝘯𝘵𝘦𝘳𝘯𝘢𝘵𝘪𝘰𝘯𝘢𝘭 𝘕𝘎𝘖𝘴 𝘸𝘰𝘳𝘬𝘪𝘯𝘨 𝘪𝘯 𝘵𝘩𝘦 𝘖𝘤𝘤𝘶𝘱𝘪𝘦𝘥 𝘗𝘢𝘭𝘦𝘴𝘵𝘪𝘯𝘪𝘢𝘯 𝘛𝘦𝘳𝘳𝘪𝘵𝘰𝘳𝘺.
3. 𝘛𝘩𝘦 𝘰𝘳𝘨𝘢𝘯𝘪𝘻𝘢𝘵𝘪𝘰𝘯𝘴 𝘢𝘧𝘧𝘦𝘤𝘵𝘦𝘥 𝘢𝘳𝘦: 𝘈𝘥𝘥𝘢𝘮𝘦𝘦𝘳 𝘗𝘳𝘪𝘴𝘰𝘯𝘦𝘳 𝘚𝘶𝘱𝘱𝘰𝘳𝘵 𝘢𝘯𝘥 𝘏𝘶𝘮𝘢𝘯 𝘙𝘪𝘨𝘩𝘵𝘴 𝘈𝘴𝘴𝘰𝘤𝘪𝘢𝘵𝘪𝘰𝘯; 𝘈𝘭 𝘏𝘢𝘲; 𝘉𝘪𝘴𝘢𝘯 𝘊𝘦𝘯𝘵𝘦𝘳 𝘧𝘰𝘳 𝘙𝘦𝘴𝘦𝘢𝘳𝘤𝘩 𝘢𝘯𝘥 𝘋𝘦𝘷𝘦𝘭𝘰𝘱𝘮𝘦𝘯𝘵; 𝘋𝘦𝘧𝘦𝘯𝘴𝘦 𝘧𝘰𝘳 𝘊𝘩𝘪𝘭𝘥𝘳𝘦𝘯 𝘐𝘯𝘵𝘦𝘳𝘯𝘢𝘵𝘪𝘰𝘯𝘢𝘭 – 𝘗𝘢𝘭𝘦𝘴𝘵𝘪𝘯𝘦; 𝘏𝘦𝘢𝘭𝘵𝘩 𝘞𝘰𝘳𝘬 𝘊𝘰𝘮𝘮𝘪𝘵𝘵𝘦𝘦𝘴 (𝘏𝘞𝘊); 𝘜𝘯𝘪𝘰𝘯 𝘰𝘧 𝘈𝘨𝘳𝘪𝘤𝘶𝘭𝘵𝘶𝘳𝘢𝘭 𝘞𝘰𝘳𝘬 𝘊𝘰𝘮𝘮𝘪𝘵𝘵𝘦𝘦𝘴 (𝘜𝘈𝘞𝘊); 𝘢𝘯𝘥 𝘵𝘩𝘦 𝘜𝘯𝘪𝘰𝘯 𝘰𝘧 𝘗𝘢𝘭𝘦𝘴𝘵𝘪𝘯𝘪𝘢𝘯 𝘞𝘰𝘮𝘦𝘯'𝘴 𝘊𝘰𝘮𝘮𝘪𝘵𝘵𝘦𝘦𝘴 (𝘜𝘗𝘞𝘊).
Read more
1 of 5
View all 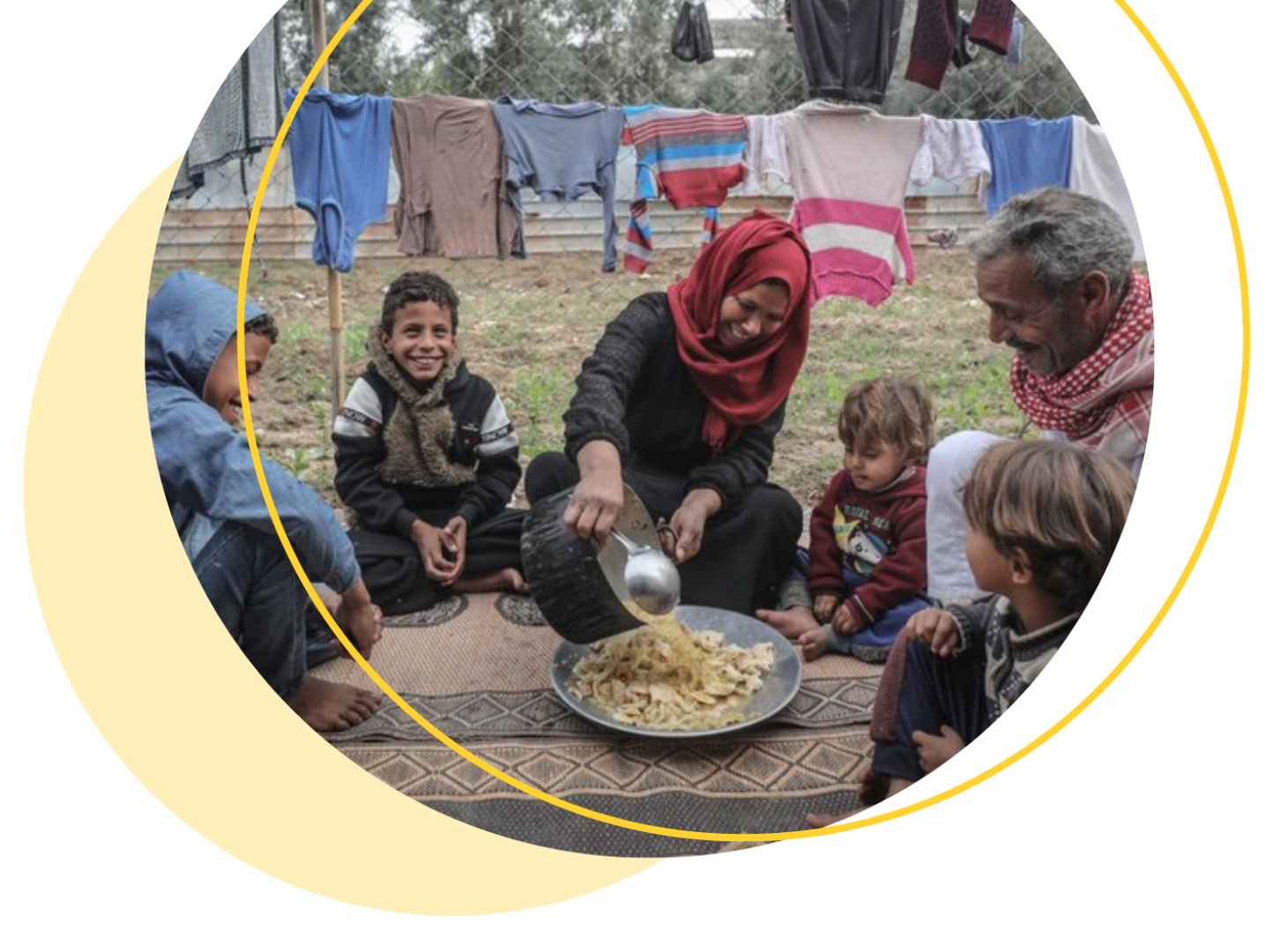 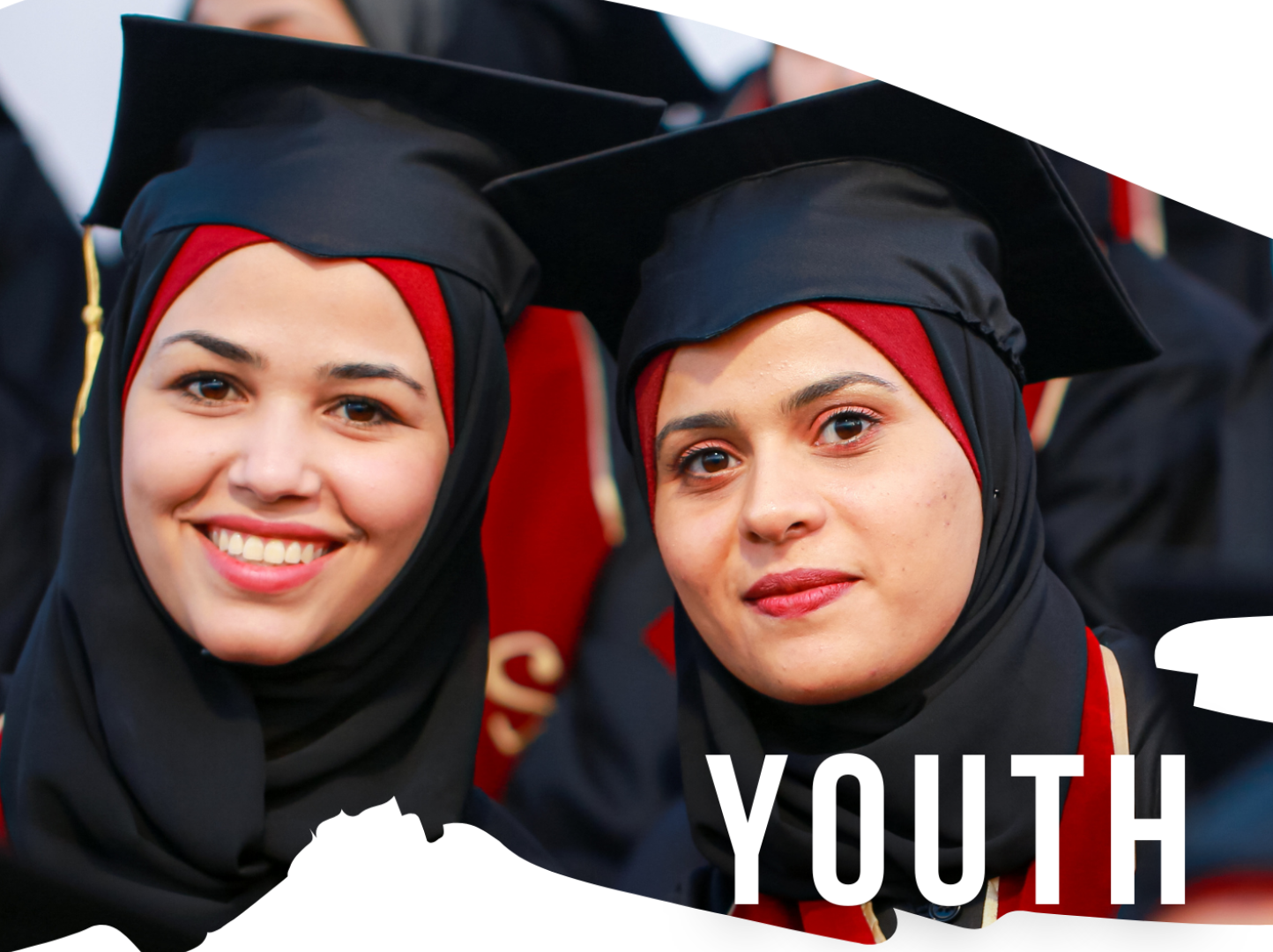 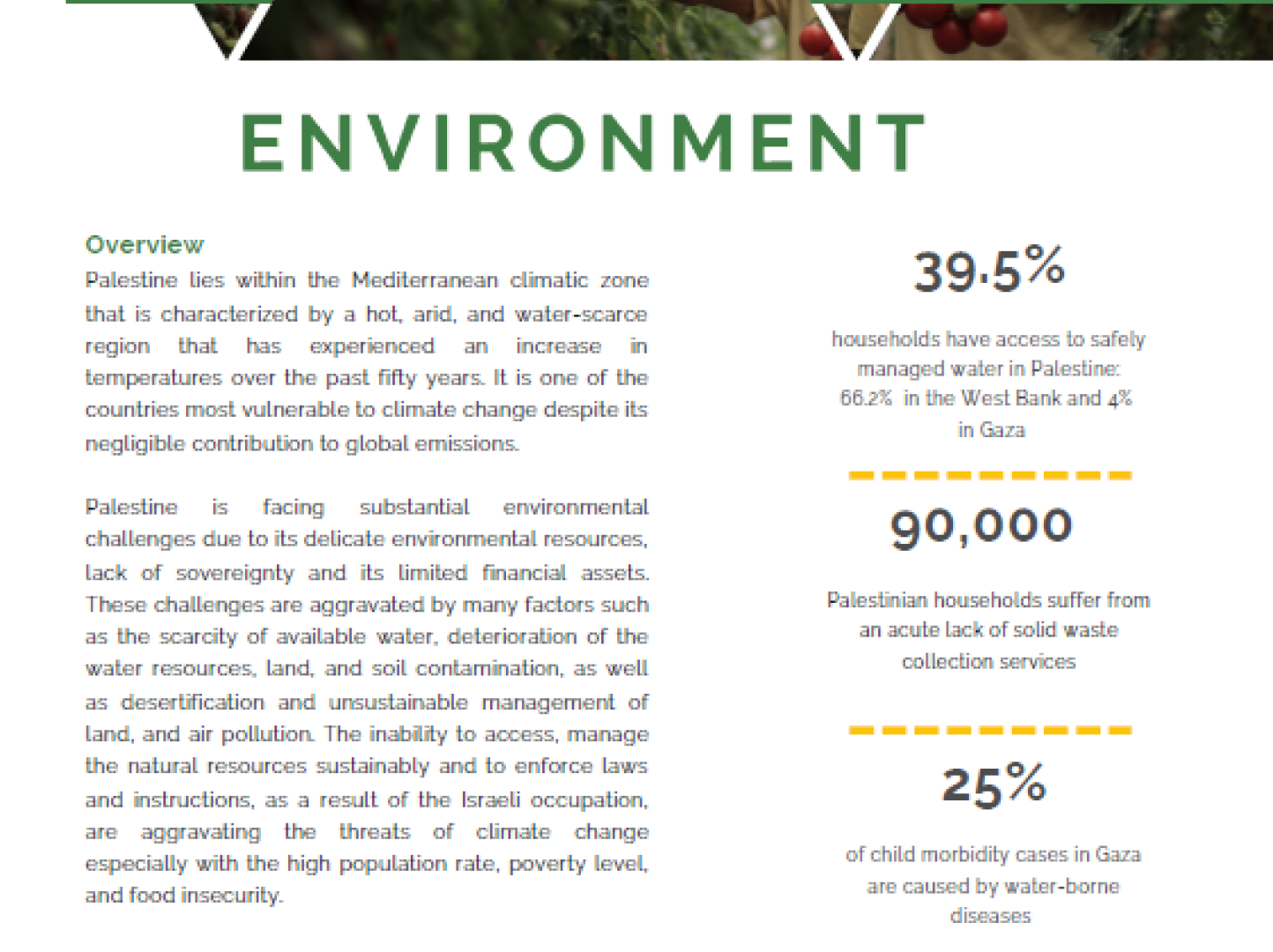 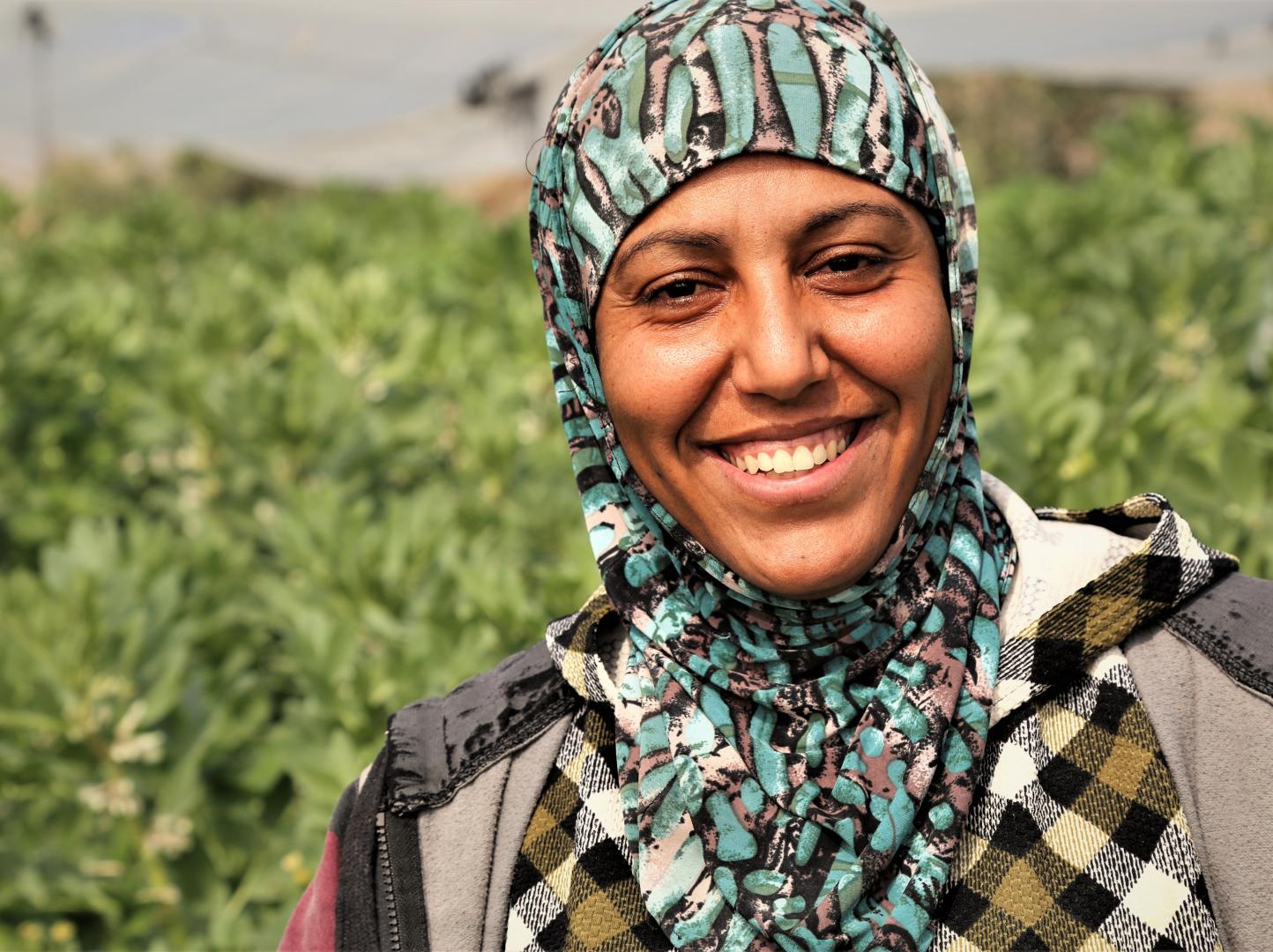 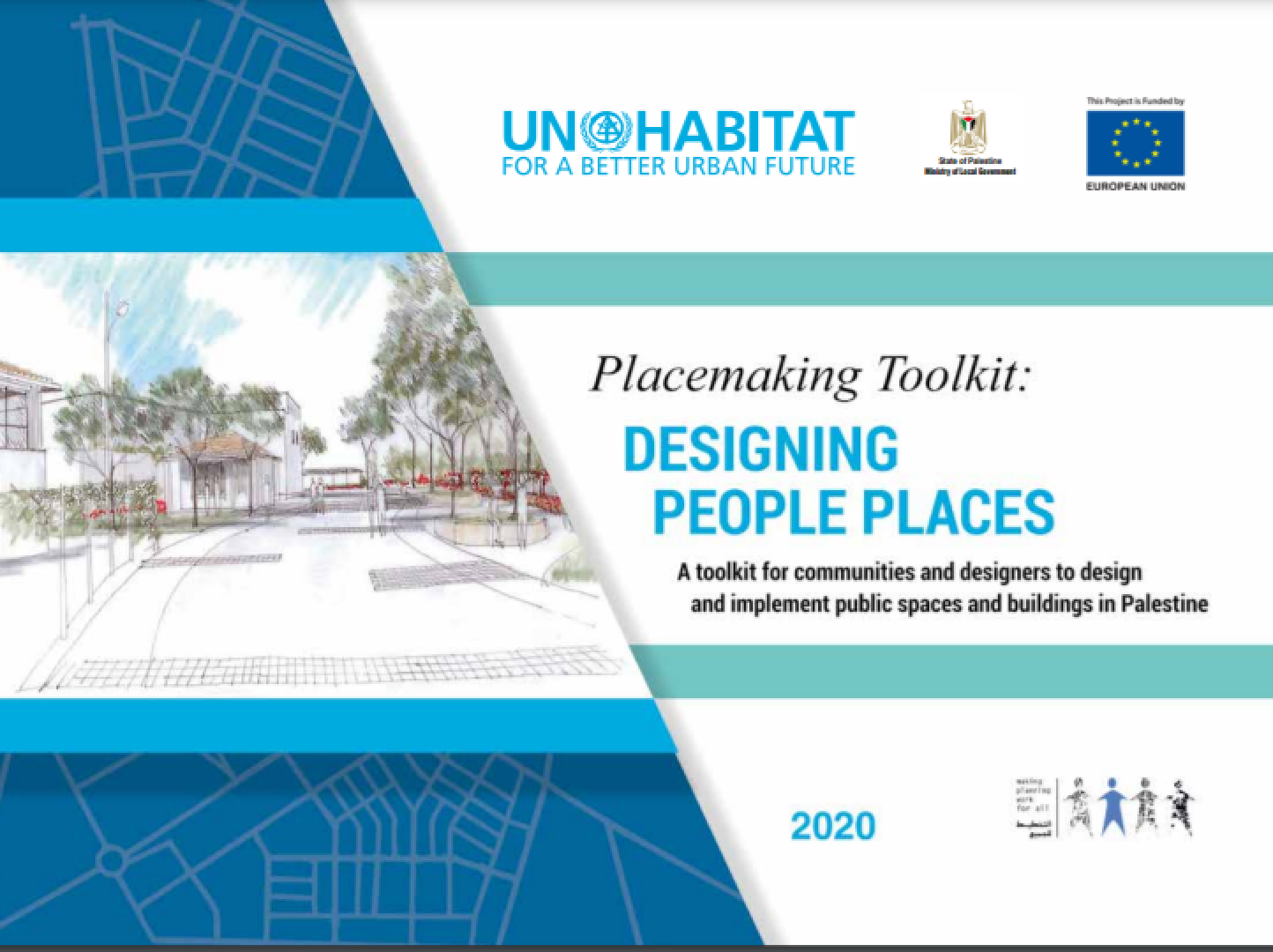 Resources
25 November 2021
Placemaking Toolkit: Designing People Places - A toolkit for communities and designers to design and implement public spaces and buildings in Palestine 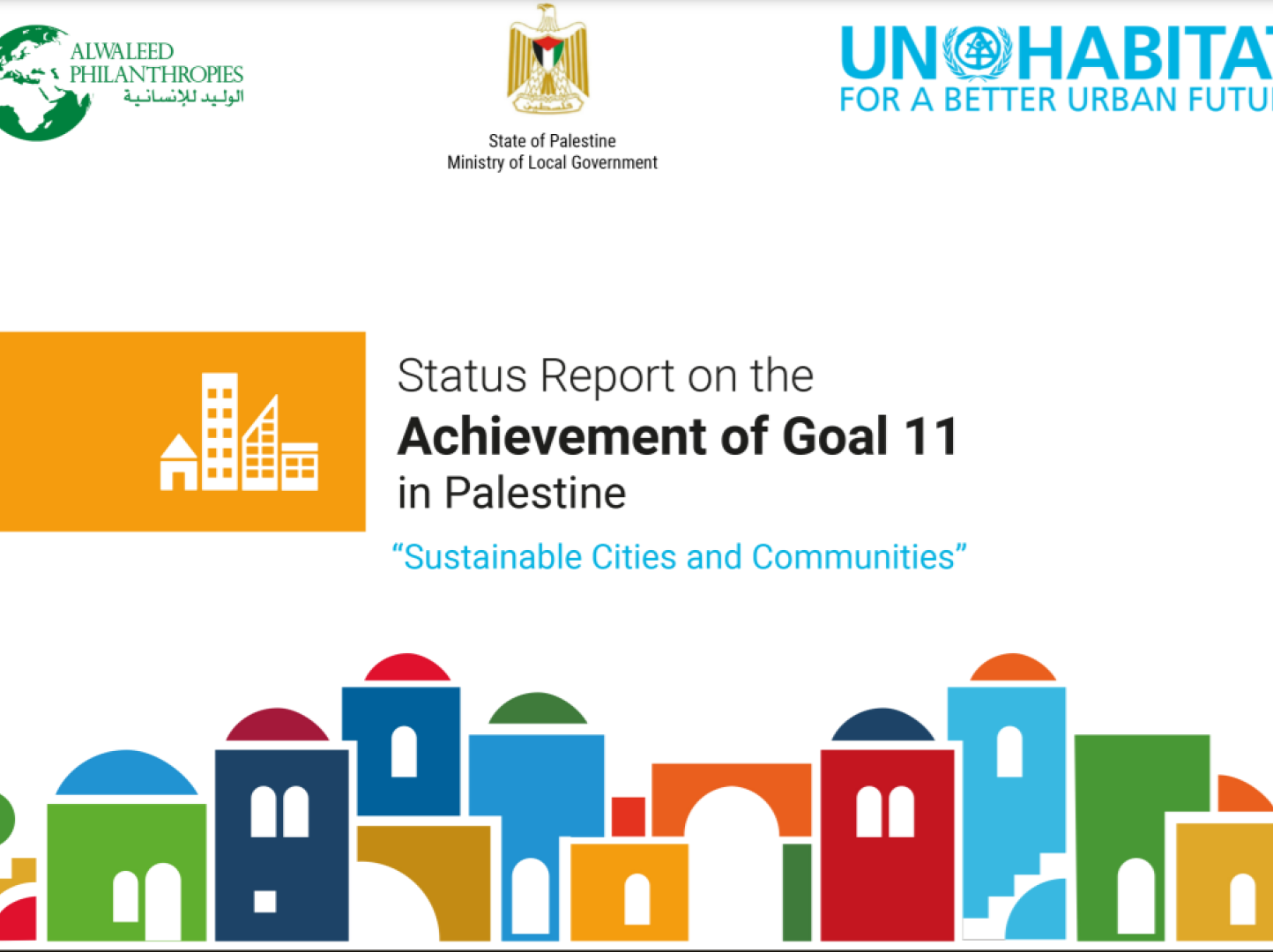 Resources
25 November 2021
Status Report on the Achievement of Goal 11 in Palestine: Sustainable Cities and Communities 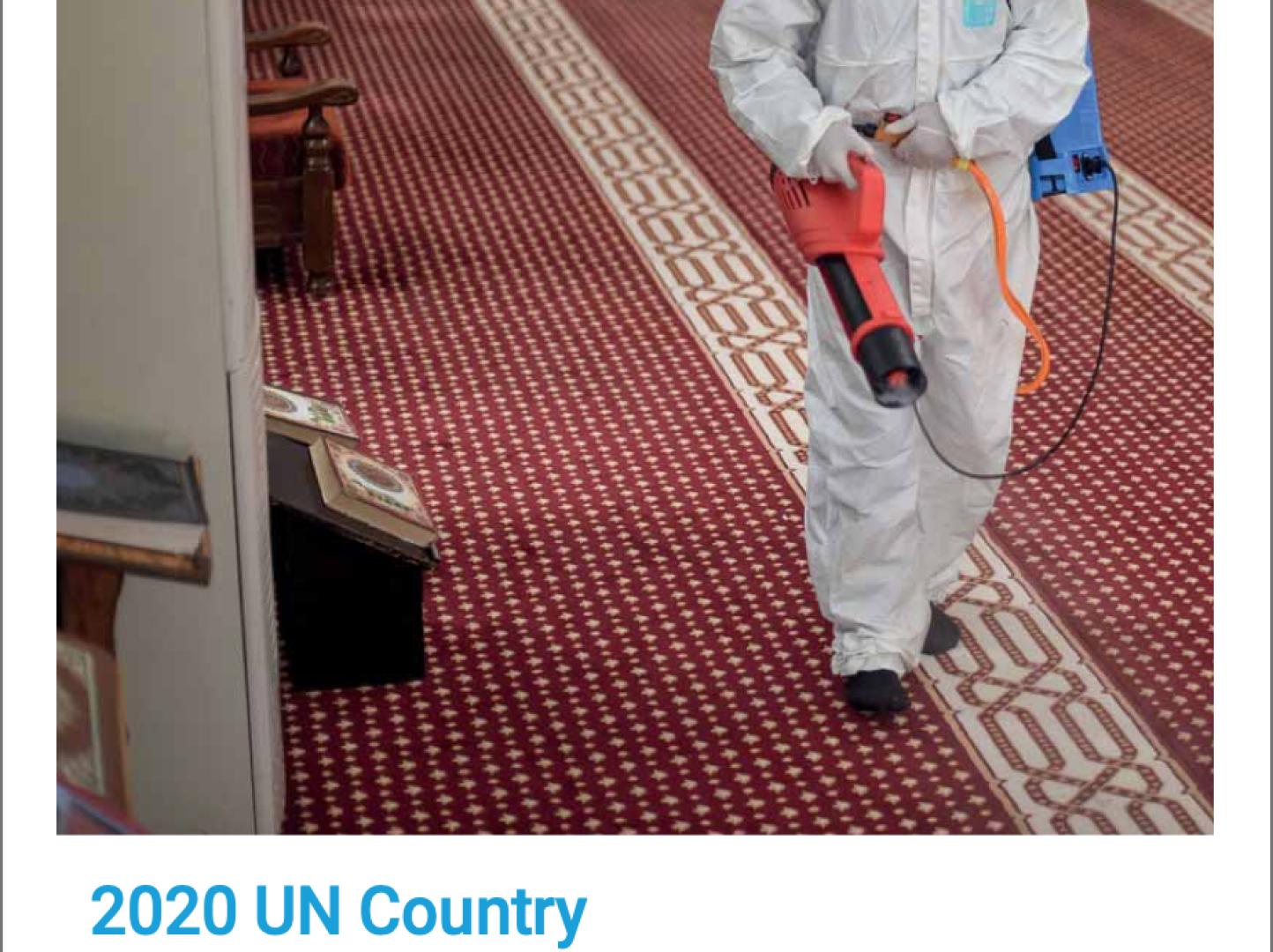 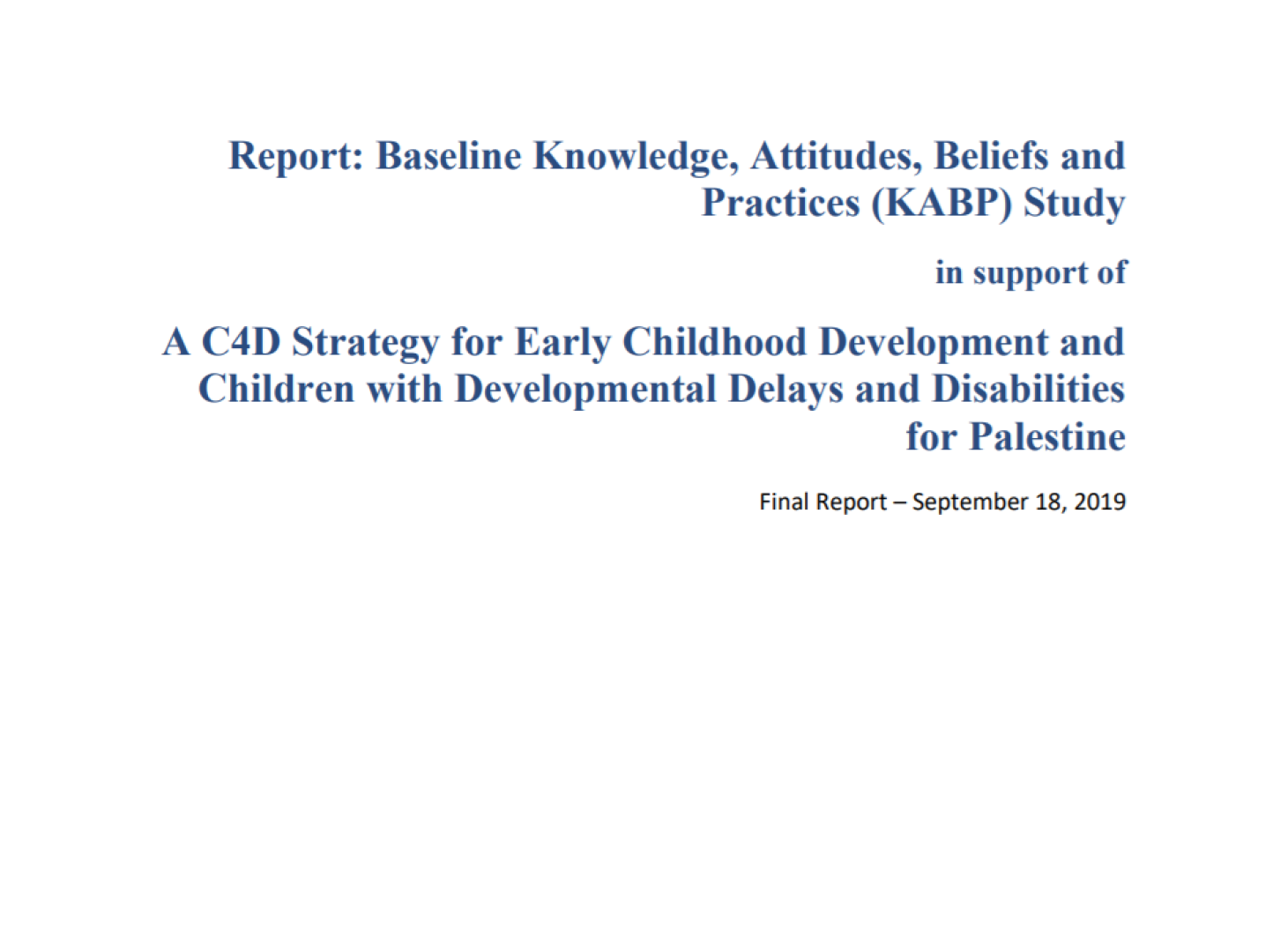 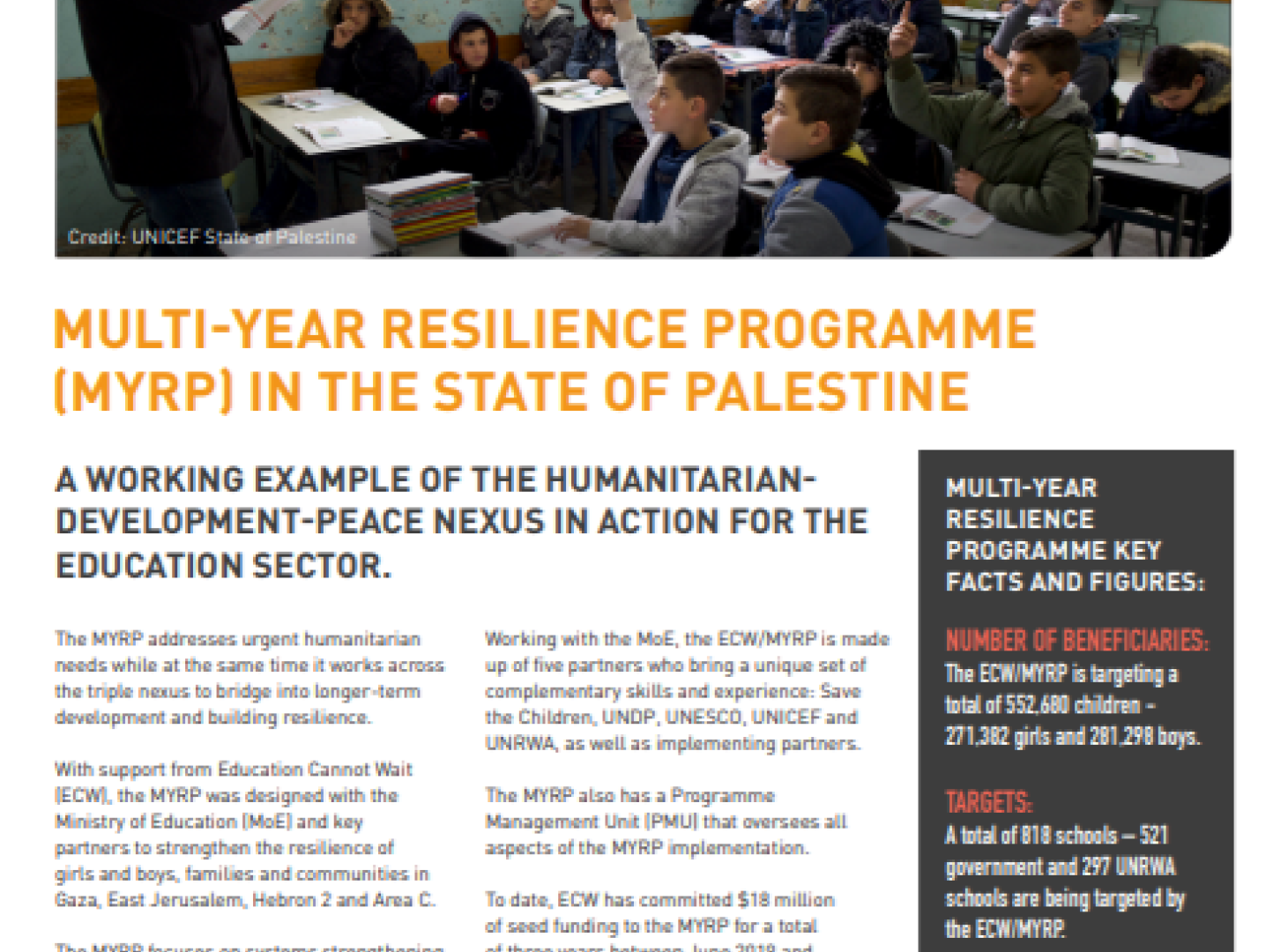 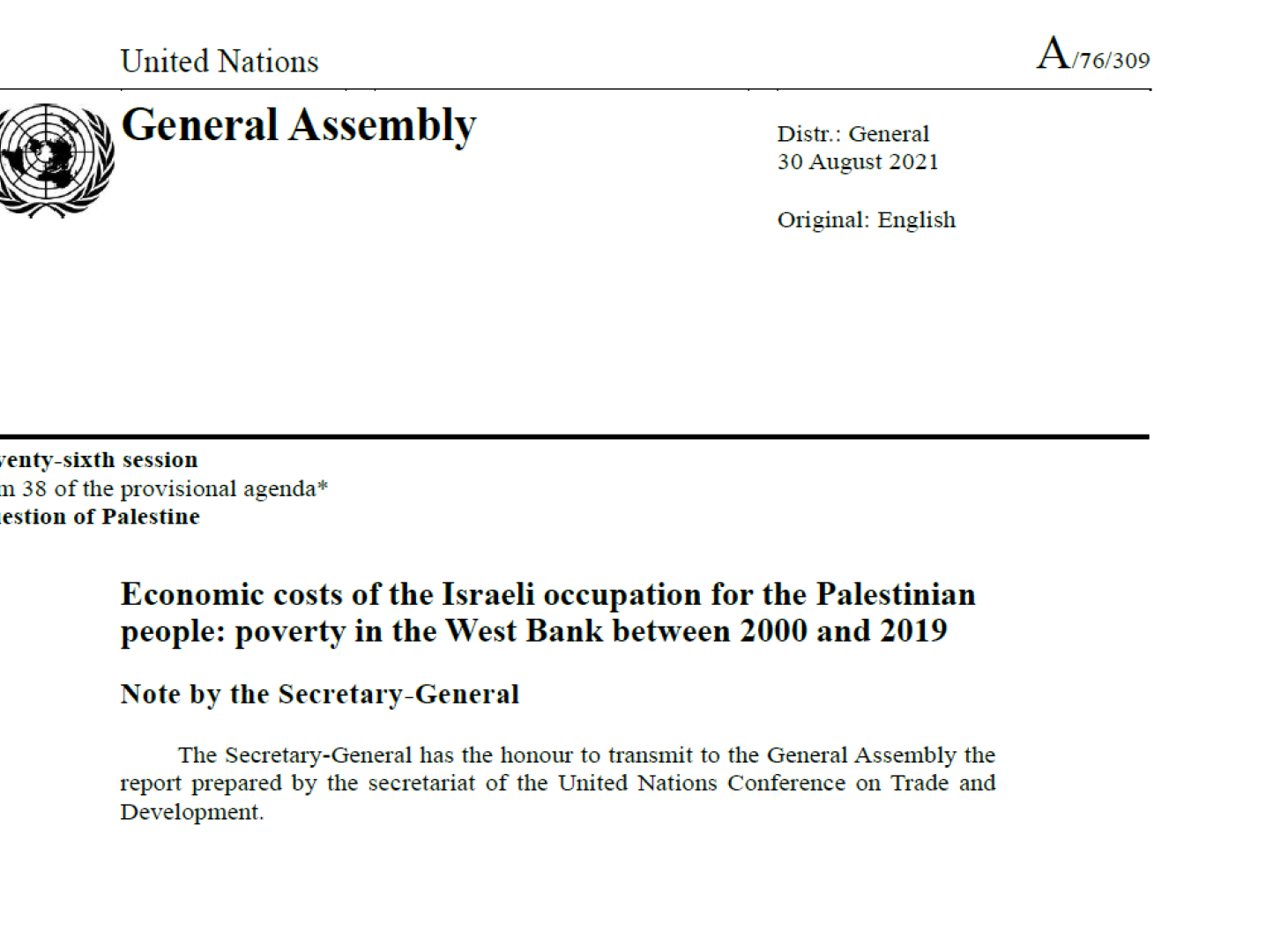 Resources
24 November 2021
Economic costs of the Israeli occupation for the Palestinian people: poverty in the West Bank between 2000 and 2019
1 / 11